The rivers of Arkansas in the early nineteenth century were the equivalent of today’s interstate highways. Before roads and bridges were constructed, waterways were the most dependable travel corridors, particularly to the “interior,” those areas away from the largest rivers such as the Mississippi and Arkansas. Undoubtedly prehistoric Native Americans and EuroAmerican hunters and trappers took note of resource-rich areas in the lands that would become Lawrence, and eventually Randolph counties.

The site of Davidsonville was an especially productive one, since it is in an area fed by five rivers, as follows: the Black, the Current, the Eleven Point, the Fourche and the Spring. The town site is just north of the confluence of the Spring and Black rivers. River confluences support a wider variety of plant and animal species than individual streams (Rice et al. 2008:211-214). The fact that Davidsonville is close to the edge of the Ozark Mountains as they drop down into the Mississippi River delta also suggests a greater diversity of habitats.

All of the public buildings and businesses in Davidsonville appear to have been on either side of one street leading to and from the river’s edge. The town was oriented to the river, not to magnetic north, or to a road, or state highway as Davidsonville Historic State Park is today. It had a broad gently-sloping riverfront and a stable riverbank underlain by bedrock. The land at the river’s edge between the river and the public square was known as “the Commons.” This was an area that may have been publicly owned.

It is likely that there was a wooden landing/dock at the river, or perhaps two, one for unloading commercial goods, and another for travelers. Since the Black River floods nearly every spring, these landings may not have been very substantial. Other types of buildings that may have stood at the riverfront were roofed storage for dry goods, and boat construction or repair structures.

The only direct archeological evidence of river travel found at Davidsonville is a fragment of a swivel gun found beneath the tavern in Lot 35 (Link to online catalog image). Piracy was a concern for anyone traveling by river on the Arkansas frontier. Swivel guns were commonly mounted on the front of keelboats.

Other types of river craft from this time include canoes, pirogues (dugouts), flatboats, and keelboats. Flat-bottomed boats were used to carry Davidsonville’s products to markets in St. Louis or New Orleans. The boats returned, loaded with manufactured goods and groceries. These boats measured about 15 feet wide by 40 feet long (Shah 2005:31).

Before bridges were constructed in Arkansas Territory (and elsewhere), ferries were essential to the transportation system. Licenses to operate ferries were issued all over the territory. Davidsonville court records indicate, for example, that Joseph Hardin received a license to keep a public ferry across the Black River in 1824. With the court’s approval he charged the following fees: “man and horse, 25 cents, man or horse 12½ cents; sheep or hogs, 6¼ cents, waggon [sic] and team with more than two horses $1.00; any carriage with two horses 50 cents” (Allen 1995:18). The first mention of a ferry in the vicinity of the town is one crossing the Spring River at the mouth of the Eleven Point in 1818 (Allen 1995:1).

Ferryboats were flat, single-hulled wooden vessels with preferably enough room for a carriage or wagon and a team of four horses. The Davidsonville ferry might have been either horse powered or a chain/rope ferry. The horse-powered ferry was invented in 1819, and consisted of a horizontal wheel under the deck of the ferry boat that was rotated by a team of horses.

The rope or chain ferry is oldest known type of ferry in the world, good for shorter distances. The ferry boat is propelled along ropes or chains connected to each shoreline. These ferries were sometimes powered by an individual on the boat (and also using long poles). A reaction ferry used the power of the river against a fixed tether to propel the boat across the river. Sometimes this kind of ferry had a rudder to help steer the boat. 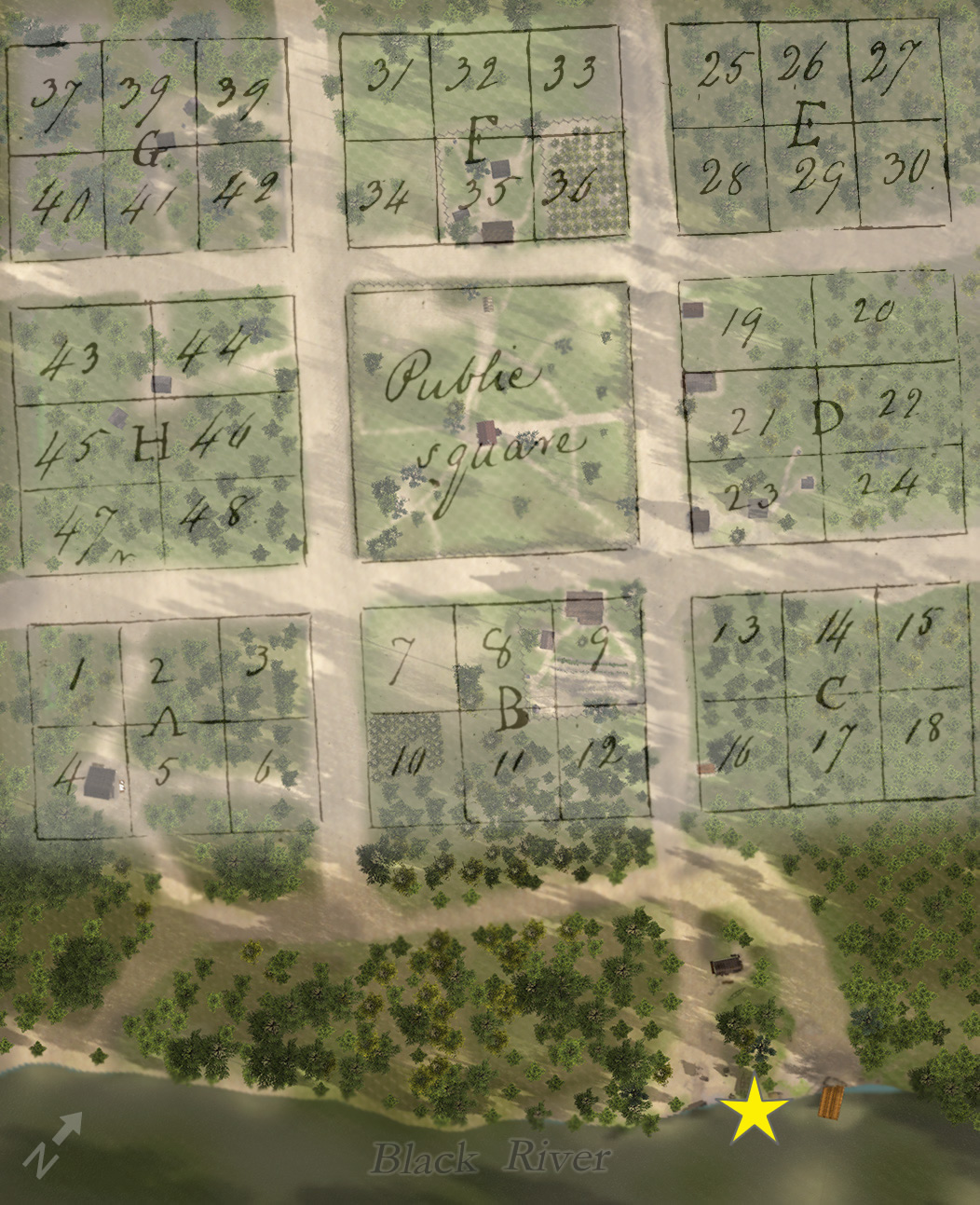 3D Depictions of the River/Ferry 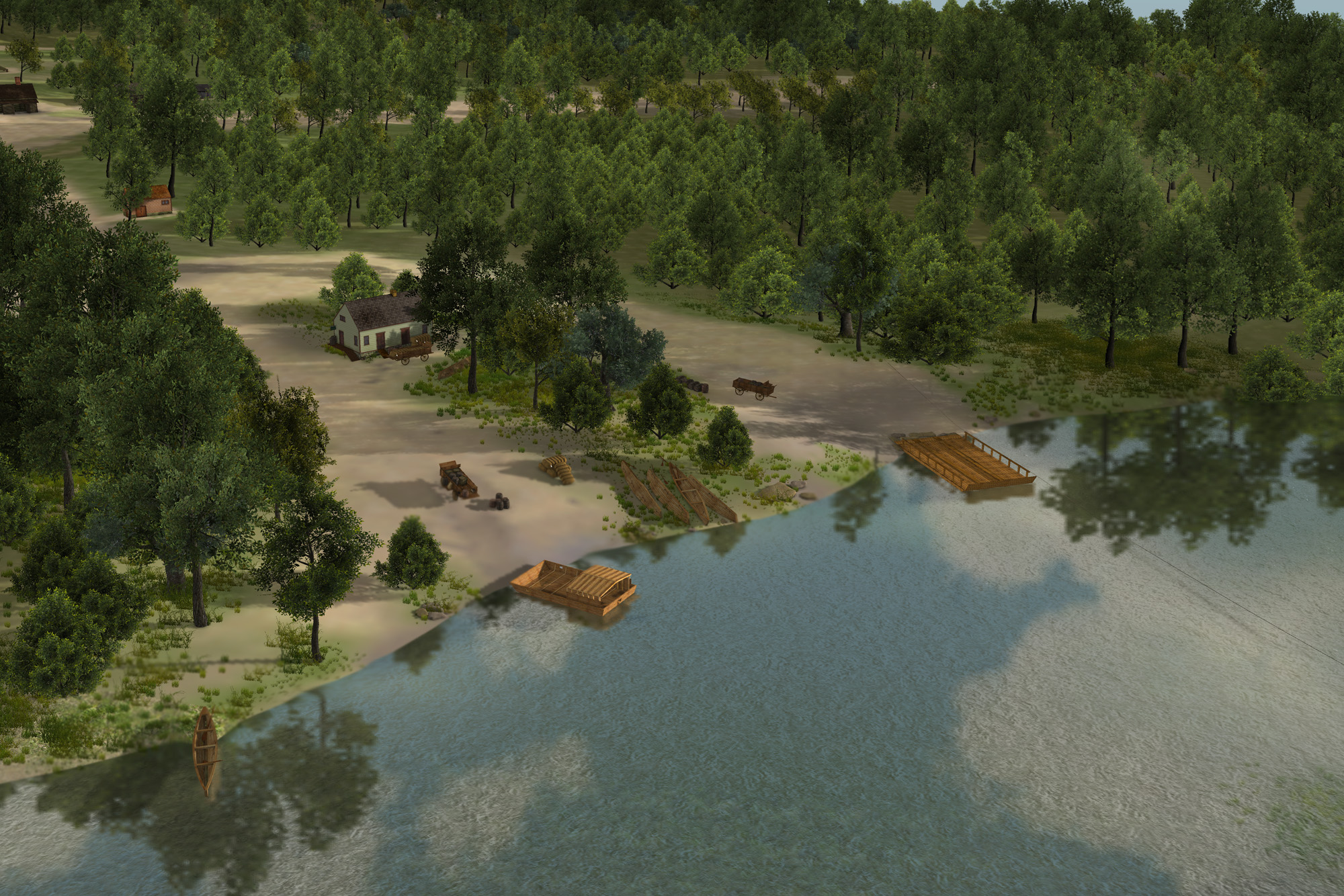 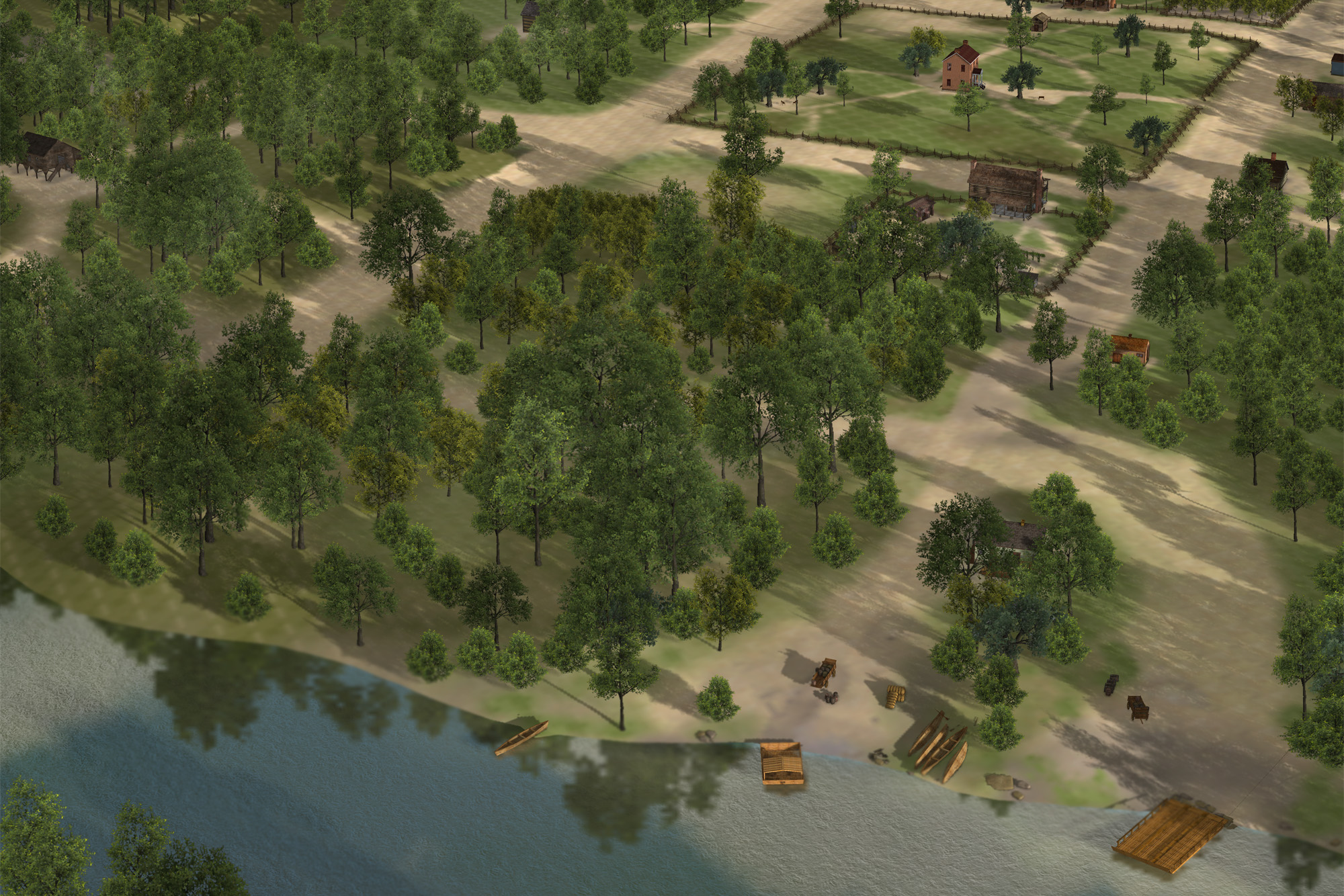 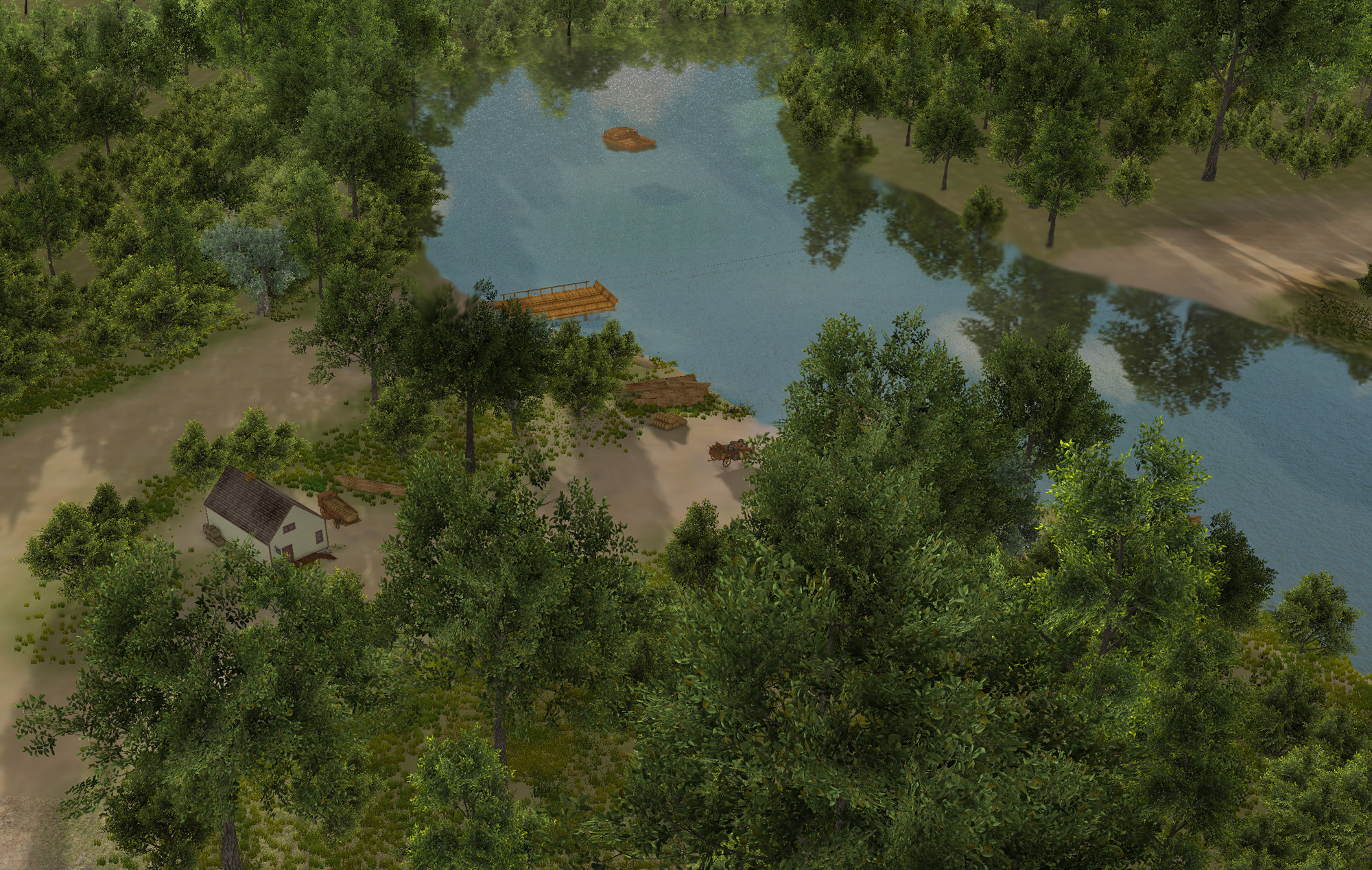 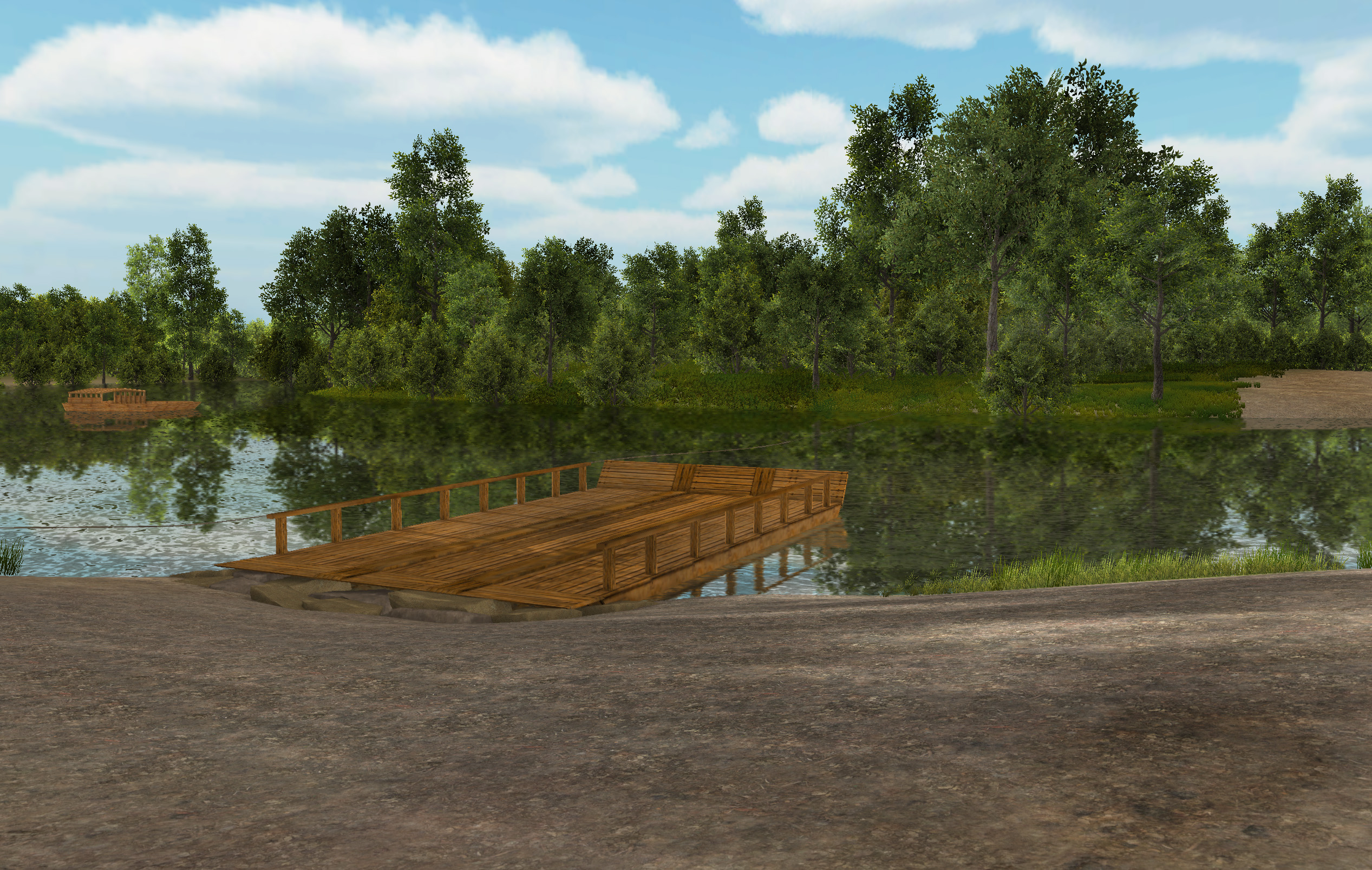 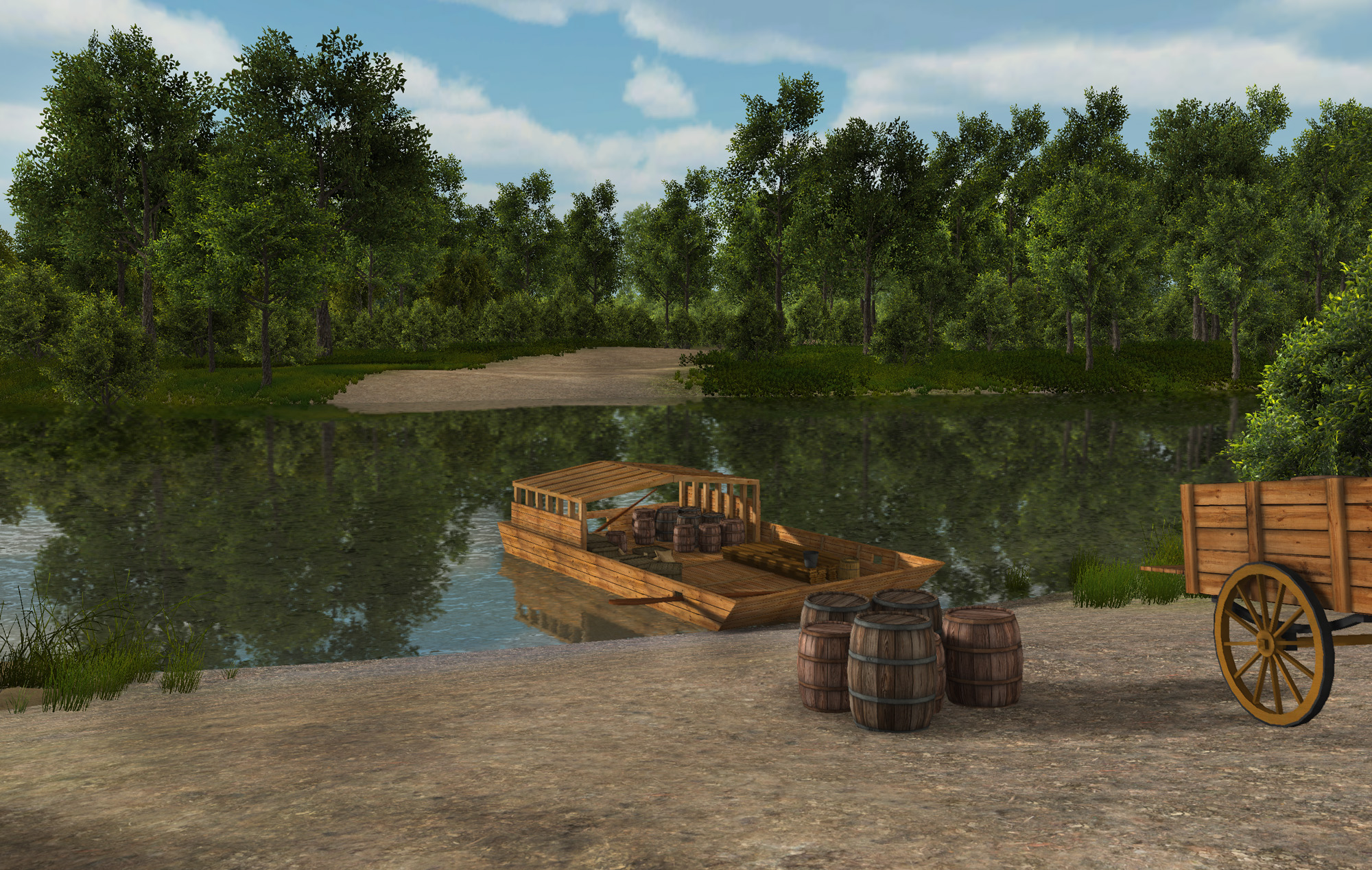